On Thursday, February 4th I gave a talk for the Bellingham Linux Users Group (BLUG), 'touring' openSUSE 11.2 as a desktop OS, and giving a broad overview of the projects and community that culminates in the openSUSE Linux distribution. For those who missed it, here's part three of the written interpretation of my discussion.
openFATE: features.opensuse.org Well, the wiki puts it quite well:

openFATE is the openSUSE community interface to the Feature- and Requirements Management System of openSUSE and Novell's Linux Business. It opens the process of product planing and helps to:

The feature database is public, everyone can browse all openSUSE features without the need to log in. An openSUSE account is only needed to comment, change or vote for features. 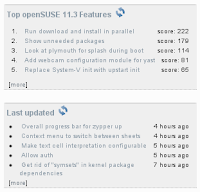 In addition, a variety of tools have been put in place to make it easy for the community to manage new feature requests. A search engine is available for supported browsers; a dashboard provides ready access to both popular and new feature requests; mailing lists, RSS feeds, and integration with Hermes (I'll explain that in part 6).
The feature that most clearly distinguishes openFATE is also the obvious one: this is not for bugs! Bugs continue to be handled through Bugzilla, which does an excellent job. By distinguishing feature requests from bugs, contributers can more easily focus on the task at hand; the bug handling teams are relieved of the the load generated by feature requests, and true 'bugs', such as security issues, are prioritized over the addition of new features.

On Thursday, February 4th I gave a talk for the Bellingham Linux Users Group (BLUG), 'touring' openSUSE 11.2 as a desktop OS, and giving a broad overview of the projects and community that culminates in the openSUSE Linux distribution. For those who missed it, here's part two of the written interpretation of my discussion.

The Structure of a Community
openSUSE is a free, open project. Although Novell sponsors it heavily, the project belongs to the openSUSE community. Things were not always this way; before Novell's acquisition of SuSE, SuSE internally managed the course of the distribution, with little input or participation from the user community. Novell's decision to split the SUSE product line into the free, open, community managed openSUSE project, and the Novell-owned SUSE Linux Enterprise projects, has allowed the community to embrace, extend, and direct SUSE in a way that was not possible before.
The openSUSE project is governed by a document of Guiding Principles, managed by a Board of Directors, elected by the Membership, who are appointed from the User community. I'll explain each group in a bit more detail.
There are users and there are Users
openSUSE allows for its users to officially recognize themselves, proclaiming "I am an openSUSE User!" via users.opensuse.org . As of today, there are over 11,000 registered users worldwide. As an openSUSE User, one is entitled access to the complete member directory, election results, and easy access to the other SSO-enabled openSUSE sites.
As a User, one has the opportunity to accept the Guiding Principles: the document that governs the community and the project, and defines its identity apart from, and in cooperation with Novell. In a nutshell, we are the openSUSE community; we want to create the best Linux distribution in the world; we value the ideals of free software; we are governed by the board of maintainers. So far, over 4,300 Users have accepted the Guiding Principles, establishing the legitimacy of the project as a a free, open software project.
The largest benefit to being a User, though, is the stepping stone it places before you. As a user, one can apply for openSUSE Membership. Members are, by the definition of the project, users who have made a "continued and substantial contribution" to the community.
Membership has its Privileges
Users can apply based on the merits of any contribution, but it is a request not a grant. Applications are reviewed individually (currently by the Board) and granted on a case-by-case basis. Given, most applicants are accepted, assuming they understand what they are applying for. Applying without contribution, over-embellishing, or flat out lying about your contribution is a sure-fire way to get yourself drummed out.
Members do receive some interesting benefits, most of which are only of interest to those who would want to contribute anyway: an @opensuse.org email alias, an openSUSE cloak on Freenode's IRC servers, syndication on Planet SUSE, a Lizards blog account, and most importantly, access to Board elections.
Membership requires contribution, because Members must be committed to the project. From the Members the Board is selected and elected, who make the day-to-day decisions about the direction of our distribution. It is a serious responsibility, and an important role in the community. As of today, there are nearly 400 openSUSE Members.
The Board of Maintainers
During an annual election, Members may run for a position on the Board, half of which is elected each year to server a two-year term. The Board consists always of both Novell employees, and non-employee Members. Only the chair is directly appointed by Novell. The Board provides guidance, and facilitates communication with Novell; they are the official channel between the community and the corporation, responsible for ensuring the success of the project.
Get into the Groove!
If you use openSUSE, I encourage you to sign onto users.opensuse.org, and (if you agree) register your support for the Guiding Principles. Each user that does so strengthens our community, and therefore ensures the endurance of our project. If you are giving back to the community, apply for Membership, so your contribution can be recognized, and the horizons for your participation expanded. Who knows... maybe you'll be on the Board next year ;)

On Thursday, February 4th I gave a talk for the Bellingham Linux Users Group (BLUG), 'touring' openSUSE 11.2 as a desktop OS, and giving a broad overview of the projects and community that culminates in the openSUSE Linux distribution. For those who missed it, here's a written interpretation of my discussion.

In this post, I'll cover the openSUSE 11.2 release. In my next few posts, I will cover the rest of my topics:
Additionally, my final post for those that just want to cut to the chase will be my abbreviated presentation notes covering the above, plus a few links to the following projects that I just couldn't squeeze in:
I hope you find this useful!

Released on Thursday, November 12th, 2009, 11.2 was the third of four releases of the openSUSE 11 line. In addition to a the typical incremental application upgrades, and the introduction of some exciting new technologies, 11.2 also included some dramatical political and process changes, dominated by the decision to make KDE the default desktop. openSUSE, is once again the premier KDE distribution, evidenced by KDE's top-billing of the KDE-Four-Live images on openSUSE. KDE 4.3 provides a modern, efficient, connected desktop environment. Firefox and OpenOffice.org have been tightly integrated, using KDE file selectors, notifications, icon themes, etc. 4.3 provides the first complete revision of the 'standard' KDE apps, including updates to KNetworkManager, Amarok, Digikam, k3b, and Konversation, among others. All of this application integration is topped off with a polished graphical theme: Air. Despite the decision to default to KDE, the Gnome desktop continues to be well supported, well integrated, and well polished. Jakub 'jimmac' Steiner brought out a clean, dark, green Sonar theme, used as the new default from grub's boot messages through to Gnome's desktop. Although Ubuntu 9.10 also shipped with some dark themes, Sonar differentiates itself by maintaining a light document area that more cleanly incorporates non-native applications, such as Qt/KDE apps, Java apps, and OpenOffice.org. Title bars and some configuration headers are adorned with jimmac's Fifth Leg font, which is a free font inspired by the font used for SUSE logos.

In addition to improvements to the desktop environments themselves, both KDE and Gnome include mature social networking applications. Choqok and Gwibber are microblogging apps (Twitter, Identica, Facebook, etc.) for KDE and Gnome, respectively. Both Pidgin and Kopete instant messenger clients include Facebook chat plugins. KDE's Plasma desktop includes plugins and widgets for integrating with microblogs and openDesktop.

Deeper down the stack, 11.2 includes some exciting new technologies. The desktop kernel is installed by default with the graphical desktops (the default kernel is preferred for server applications). Ext4 is now the default file system, but the upcoming btrfs is included as well. Also on the file system front, complete hard drives can now be encrypted during installation. Zypper & libzypp, the universal package management library, are faster than ever, more feature complete, and dependency resolution has been completely reworked with an algorithm called Sat Solver.

openSUSE Ambassadors, including myself, can provide the awesome 11.2 community DVD. This dual-layered double-sided disc is 32-bit on one side, 64-bit on the reverse, and will boot to Live Gnome, Live KDE, the DVD installer, or a set of utilities. Contact me if you'd like one!

16 Months after 37Signals made their move to curb IE6, Google announced today that it would do the same, for much the same reasons.

Here's the email I received from Google explaining the move:

In order to continue to improve our products and deliver more sophisticated features and performance, we are harnessing some of the latest improvements in web browser technology. This includes faster JavaScript processing and new standards like HTML5. As a result, over the course of 2010, we will be phasing out support for Microsoft Internet Explorer 6.0 as well as other older browsers that are not supported by their own manufacturers.

We plan to begin phasing out support of these older browsers on the Google Docs suite and the Google Sites editor on March 1, 2010. After that point, certain functionality within these applications may have higher latency and may not work correctly in these older browsers. Later in 2010, we will start to phase out support for these browsers for Google Mail and Google Calendar.

Starting this week, users on these older browsers will see a message in Google Docs and the Google Sites editor explaining this change and asking them to upgrade their browser. We will also alert you again closer to March 1 to remind you of this change.

In 2009, the Google Apps team delivered more than 100 improvements to enhance your product experience. We are aiming to beat that in 2010 and continue to deliver the best and most innovative collaboration products for businesses.

Thank you for your continued support!


Email preferences: You have received this mandatory email service announcement to update you about important changes to your Google Apps product or account.

With Google Apps continuing to gain market share in government, corporate, and small business, this should help significantly in the efforts to rid the web of the one browser that makes web developers and designers cry.

On the heels of my presentation at LFNW09 on Cloud-based web development, I was asked what my qualifications were to present on the topic.

Personally, I think education is the best teacher, but sometimes you need a piece of paper to prove your skills. So, in addition to my 14 years of web development experience, two and a half years working on Ruby on Rails, and two years on BungeeConnect, I do have some certificates to back it up. 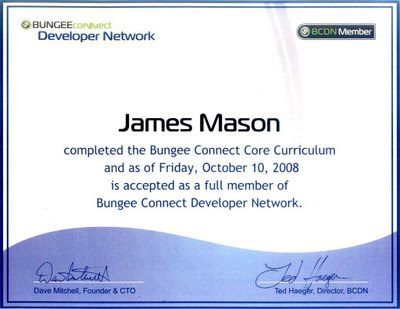 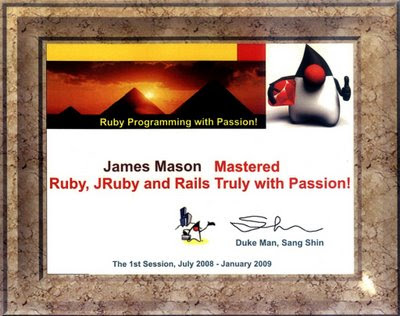