The news is starting to get out that Whatcom County, WA's Smart Trips program is not just environmentally smart, but tech-savvy too. Last week they launched a Web Service providing real-time stats on the environmental impact of not driving alone. This is something I've been pushing for, in order to make the impressive stats a bit more accessible.

A few hours after receiving a link to the WSDL, I had a working demo running in BungeeConnect. A bit of wrangling back and forth on the style, and within a couple days, I have a functioning Google Gadget that mimics a printed poster of the statistics. Of course the poster's size is more impressive, but it's not real-time!

This is, without a doubt, the fastest I've ever delivered anything on the web. It's also my first Google Gadget, and the first time I've consumed a WSDL.

Props to the team at Bungee Labs for making it easy, Yamato Engine Specialists for sponsoring the effort, and the staff at Smart Trips for being flexible enough to jump into the web services pool.

So, add it to your iGoogle page, or any web page for that matter!

You should go to LinuxFest Northwest 2008, Saturday & Sunday April 26th, 27th at Bellingham Technical College, in Bellingham, WA. No admission, no need to register, although I do recommend bringing a few $ for the salmon barbecue and the World Famous Raffle. Print out a poster and stick it somewhere visible. Or connect other attendees, through the social nets. And don't forget to thank our sponsors.

As a member of BLUG, I've been otherwise armtwisted, cajoled, and downright shamed into plugging the event.

So come. Please. Before those with more infuence than I start doing worse than armtwisting... ;)

At the tail end of their most recent podcast, Ted Haeger, (co-)host of the Bungee Line, mentioned yours truly. Feels like winning something on the radio. There goes 3 more of my 15 seconds. 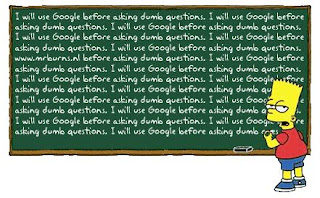 If only I had a chalkboard and compliant users...

Among other things, I'm responsible for a few kiosk workstations, which needed some attention. They had been running openSUSE Linux 10.1, with KDE 3.5, using KDE's Kiosktool to lock things down, but since I'm moving to Gnome, I thought I should bring them along. So I grabbed one machine, and installed openSUSE 10.3, and started to learn:

The last stumbling block was some leftover cruft in /tmp, so I added a line to the user-home-fixer-upper script to clear anything from /tmp related to the kioskuser, and viola, a relatively un-muckable desktop.

So I put the machine back out, and let it marinate in user sauce for a week, and the only thing that had changed was the volume (I'll figure that out eventually). So I called it good, and created an image of the drive to copy to the other systems:
Although grub came up fine, and via the rescue system all was good, the system wouldn't boot.

After a bit of stumbling around with Google, and the help of countd on #opensuse at freenode, I nailed down the problem:
So I changed those files to use /dev/sdaN instead of /dev/disk/by-id/....partN and bam; a working copy.

Thanks to opengecko for his excellent post, which summarizes my path to clonedom.