On Thursday, February 4th I gave a talk for the Bellingham Linux Users Group (BLUG), 'touring' openSUSE 11.2 as a desktop OS, and giving a broad overview of the projects and community that culminates in the openSUSE Linux distribution. For those who missed it, here's my presentation notes.
Cut to the Chase: Presenter's Notes & Links

KDE 4.3 as the “default” desktop. If you install from DVD without

changing anything, you’ll have the KDE desktop by default. However, we

still provide GNOME as an equal choice, and Xfce and other window

Subscription script for the Nvidia repository autodetects the appropriate kernel driver for installation/subscription.

What's on the disc?

KDE Live, Gnome Live, DVD Installer, 64-bit on one side, 32-bit on the other. The label is opposite the data. Super handy!

openSUSE User: "I use openSUSE Linux"

Guiding Principles: we are the openSUSE community; we want to create the best Linux distribution in the world; we value the ideals of free software; we are governed by the board of maintainers. https://users.opensuse.org/guidingprinciples

Users can request membership; membership is only granted by the board, for "continued and substantial contribution"

Feature planning for openSUSE and SLE

Upload source and build instructions (rpm spec/?), and your packages are automatically rebuilt when one of your uploads, dependencies, or target distros change.

For each project build, a clean VM is constructed, your source added, packaging performed, results & log extracted to download. , then VM destroyed.

openSUSE 11.2 and all pre-release builds (Factory, Milestones, RCs) were built entirely on OBS!

Select a base image

Overlay files onto the image

Test Drive: run the appliance on Studio servers, test, configure, add changes to the base image.

or turn on networking for ssh, http, https.

Users create preferences: what do I want to be notified about (openFATE feature changes, OBS status)

Relays check for updates applicable to users, and sends updates to Agents

Open-source Git hosting. What Github is to Ruby, Gitorius is to Linux.

Full source code (for running your own Gitorius server) at http://gitorious.org/gitorious

Download Factory to keep on top of the developing version (if you dare). http://software.opensuse.org/developer

On Thursday, February 4th I gave a talk for the Bellingham Linux Users Group (BLUG), 'touring' openSUSE 11.2 as a desktop OS, and giving a broad overview of the projects and community that culminates in the openSUSE Linux distribution. For those who missed it, here's part seven of the written interpretation of my discussion.
openSUSE 11.3 Milestone 2 (Number Two Always Tries Harder)
11.3M2 released on February 17th, right on schedule. M2 includes final releases of many major projects that were in prerelease for M1: KDE 4.4, OpenOffice.org 3.2, and VirtualBox 3.1.4. 11.3 is shaping up to be an unusually large update on the desktop, with major updates to KDE and Gnome, as well as the addition of LXDE as a lightweight desktop. Empathy may finally supplant Pidgin as the default Gnome IM client, and Digikam and Evolution both have substantially improved new releases.
Under the hood, kernel 2.26.33 (which is now in RC8) is the working kernel, and hwinfo 16.12 adds new cpu feature detection.

Development tools are also getting a shakeup, with Monodevelop 2.2 (on Mono 2.6), Bootchart 2.0, and a host of updates to the Kiwi imaging system (which powers OBS, SUSE Studio, and openSUSE's LTSP implementation).
Current work is now focused on moving over to GCC 4.5 for the M3 release, scheduled for March 4.
You can always download the current development release at http://software.opensuse.org/developer

On Thursday, February 4th I gave a talk for the Bellingham Linux Users Group (BLUG), 'touring' openSUSE 11.2 as a desktop OS, and giving a broad overview of the projects and community that culminates in the openSUSE Linux distribution. For those who missed it, here's part six of the written interpretation of my discussion.
Hermes: They get the word out, you hear it your way. hermes.opensuse.org
Hermes is described as a "personal message dispatcher." (What?) In short, Hermes' administrators define 'resources' (sources of information that update Hermes when something noteworthy happens), and 'agents' (interfaces to communication systems: web pages, RSS feeds, emails, Jabber IM, Twitter). You, the end user, create 'preferences': what resources do I want to follow, and which agent should notify me? In the background, Hermes uses 'relays' (scalable scheduled processes) to find matches between your 'preferences' and incoming messages from 'resources', then route them to the appropriate 'agent'. Still confused? Here are some examples:
Hermes is an up-and-coming project, aimed at making it easy to keep up to date by any means you prefer. As more projects are added as resources, I expect it to become the standard for project status communication.
Git Git Git... Gitorious: gitorious.org

Gitorious is an open-source server for centralizing git (distributed version control system) repositories. Gitorious.org implements the gitorious server for hosting open-source applications. Its open nature and implementation quality have attracted some of the largest open-source
projects out there, including:
If you're looking for a safe place to host your open-source project, it will be in good company on Gitorious.

SUSE Studio - Rolling Your Own: The openSUSE Ecosystem, Part 5

On Thursday, February 4th I gave a talk for the Bellingham Linux Users Group (BLUG), 'touring' openSUSE 11.2 as a desktop OS, and giving a broad overview of the projects and community that culminates in the openSUSE Linux distribution. For those who missed it, here's part five of the written interpretation of my discussion.
SUSE Studio: susestudio.com

One of the newest members of the SUSE ecosystem, Studio is drawing attention to the SUSE distributions by allowing end users to easily customize their own distribution, either in broad, user-friendly strokes, or down to the tiniest minutiae, all from the comfort of a web browser.
The results of SUSE Studio are commonly referred to as appliances, as the most common purpose of the customization is to create a single-purpose system, typically for deployment in a virtual environment.
Your appliance is only a few clicks away. 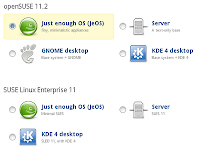 Studio jump-starts your efforts to build an appliance using a Base Image, a prebuilt foundation to work from. These are available both for graphical desktops (like KDE, Gnome and IceWM) as well as text-only and the Just Enough Operating System (think small) images, built on openSUSE 11.2, SUSE Linux Enterprise 10 & 11, for both 32 and 64-bit architectures. Recently, additional images starting becoming available, including a prebuilt LAMP stack, and openSUSE desktop images for the most recent releases of both KDE & Gnome.

After selecting a base image, you can subscribe your appliance to software repositiories, and add or remove RPMs from the base installation. Simple configuration forms allow you to customize some common options: adding users, setting network behavior, setting custom backgrounds, configuring postgres & mysql database servers, vmware and xen image attributes, and editing scripts that are run after creation or boot of the image. For more granular control, individual files (or tarballs) can be uploaded and included into the image at a selected path, with selected permissions. All along the way a sidebar summarizes recent activity on your appliance, as well as the overall size of the disc image, and a composite of the custom background & logo for easy recognition.

At any point along the way you can build your appliance to suit. Select a format (appliances can be built as LiveCD ISOs, disk or thumb-drive images, or vmware or xen virtual machines.) After selecting a version number, a background system assembles your appliance image, and compresses it for easy download.
Go ahead. Take it for a spin. 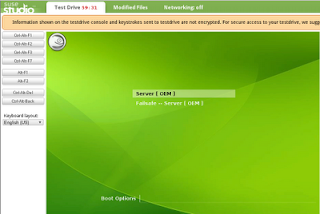 So you've added a some packages, done your configuration, maybe uploaded some config files, and built the image. Now what? Well, you could download the image and see what you missed, or you could try it out it in the Studio. When you click he Test Drive link on a built image, the image will be launched on a virtual machine, and you will be presented with it, via a flash-based VNC viewer. At this point you have an hour of live time with your appliance to try it out, or customize it directly. In addition to the VNC interface, you can see a real-time list of files modified in the appliance, and download them or install them as overlay files on the image for the next build. Test Drive also provides ssh and http access to your VM for more convenient administration or testing of web applications. When you're finished making changes, or testing things out, just close the tab and the VM will be shut down.
Just plain awesome. 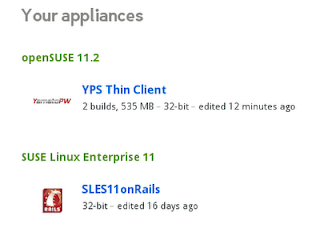 Currntly, I'm using Studio to maintain an openSUSE desktop that runs comfortably on HP thin clients, and a SLES-based Ruby on Rails server used to standardize a virtual web farm. Two completely divergent solutions, both of which are handled gracefully in Studio. Why don't you give it a try and see what you come up with... Studio makes "what if" into a downloadable image in record time :)

On Thursday, February 4th I gave a talk for the Bellingham Linux Users Group (BLUG), 'touring' openSUSE 11.2 as a desktop OS, and giving a broad overview of the projects and community that culminates in the openSUSE Linux distribution. For those who missed it, here's part four of the written interpretation of my discussion.
openSUSE Build Service, build.opensuse.org 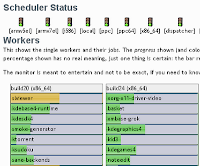 OBS allows developers to automatically build, package, and distribute software for all major Linux distributions. OBS builds RPM packages for openSUSE, SLE, CentOS, Fedora, RHEL, Mandriva, and DEB packages for Debian and Ubuntu/Kubuntu/etc-buntu.
Developers utilize the service by uploading source code and build instructions to the service, and selecting a set of target distributions. Packages are automatically built when one of your uploads, dependencies, or target distros change. Packages are arranged in projects, which provide hooks for subscribing via variety of nativepackage handlers (such as YaST, zypp, rug, etc.)
For each project build, a new virtual machine is constructed from a distro image, dependencies installed, your source added, packaging performed, results & log extracted to download. opensuse.org, then then VM is destroyed. This ensure that build is always pristine, never subject to unknown/unrecognized changes to the build environment. Those packages are hosted for free download through the downloads.opensuse.org mirrors, and registered on the search interface at software.opensuse.org/search , protecting developers from potentially costly bandwidth fees.
OBS also provides tools to aid in contributing to a project. For example, a developer can link an existing project, upload patches, then build and publish that customized package. Local tools are also available for expediting builds outside of the build cluster, and for integrating with existing source control management systems, to further simplify the process of getting your changes into the service.
OBS is flexible and scalable, allowing developers to work on small independent projects, or large groups to collaborate asynchronously. openSUSE 11.2, the pre-releases before it, and the current Factory builds are all produced completely within OBS, along with over 90,000 other packages in over 10,000 projects, by over 20,000 users!